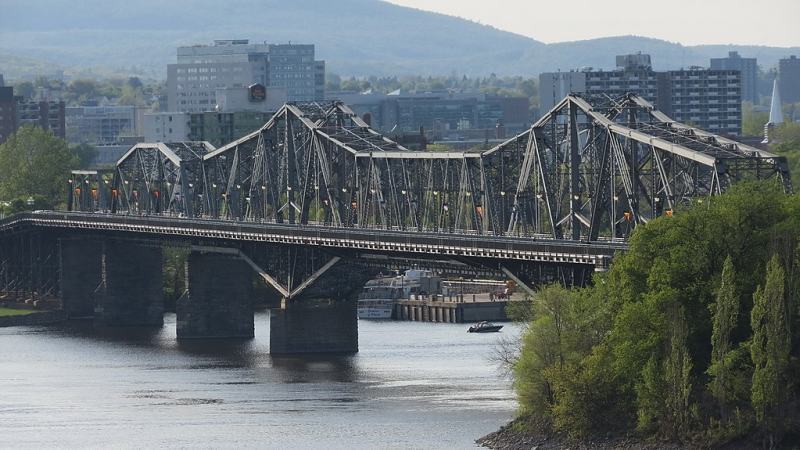 MOM, YOU AND I went for a bike ride. All the way downtown. We explored the bridges over the Ottawa River. We crossed the Alexandria Bridge, which was built in 1900. The cyclist-pedestrian portion of the bridge deck is wood. It sounded like a roller coaster over the downhill part into Gatineau. It felt a bit creaky.

We went into the Canadian Museum of History grounds. We turned the corner and you said “whoa” when you saw Parliament Hill from the backside. It is a nice view. We went down to the water and sat on a bench under the shade of a big tree. What kind of tree was it? I can't remember.

We had a little snack. We listened to the cars drive along the bridge deck. The car portion is metallic, like a grate and the sound is like some futuristic sci-fi film. We watched pedestrians and cyclists make their way from Ontario to Quebec and vice-versa. The bridge looked real high from ground level. We ate grapes and blueberries and cherries. You saved your granola bar for after. 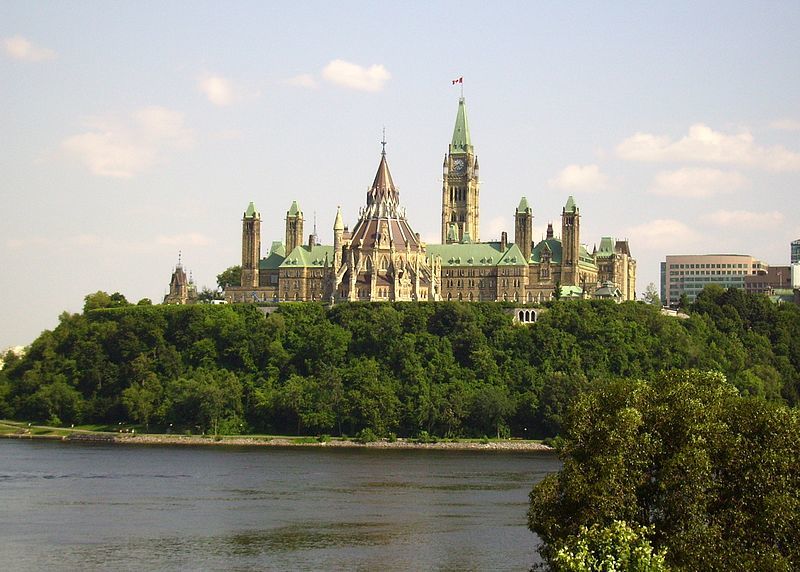 We rode until the Portage Bridge and decided to head back instead of crossing Portage because that would put us into some traffic along Wellington Street. So we went back eastbound and crossed under the Alexandria Bridge through Jacques Cartier Park. It looked like a ghost town, with fences up where last year's Mosaïculture exhibit was. I think they are remediating the grounds again. That's just a big word for fixing.

Ok, so let's see, we rode to the MacDonald-Cartier Bridge. The path was behind some trees so then you couldn't see the river anymore so we turned back to Alexandria Bridge and the museum. Then we looked at a statue of an Indigenous leader, Tessouat, whose Algonquin tribe controlled the flow of goods along the river back in the early 1600's. Tessouat was one of the first indigenous leaders to establish relations with European traders. His statue was big, maybe eight feet tall. He only had one eye. 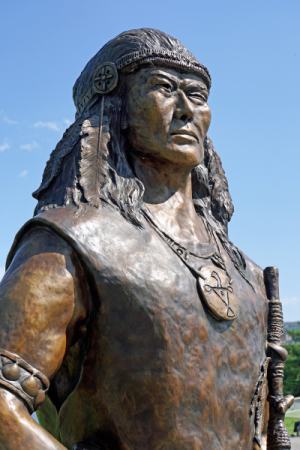 We then looked at a big teepee. I thought it'd be hotter in there, but it was surprisingly cool. I guess the opening at the top allowed the warm air to escape. We then went into this big theatre with lots of benches and the material wrapping the structure had images of indigenous people in traditional clothes and symbols and stuff. The structure was like geodesic, with many triangles in its dome. I pointed that out to you because you learned about that in school with Miss B: skyscrapers and the strength of triangular shapes in structures.

We rode back to Ottawa on the Alexandria Bridge. We turned into where Tavern on the Hill is and went down the path to the Ottawa River Pathway. It was a fast downhill and we bombed down there. I felt fast and alive and like a kid again. That put us down by the locks and we walked our bikes over one of the skinny pedestrian bridges over the lock gates. We were like “whoa” again. Now that put us on the other side of the canal locks.

Earlier I pointed out the Bytown Museum, where they host a haunted house and haunted walks around Halloween time. Mom and I went on a haunted walk one year and I told you about it. I said we could take you on one if you'd like that. You said you would like that! 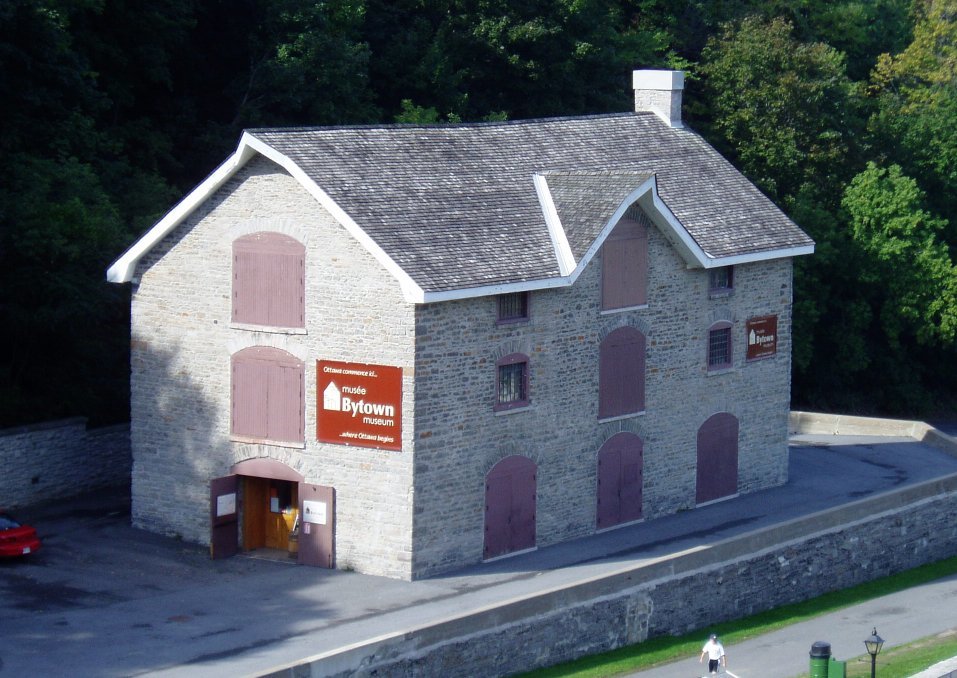 We went along the path behind Parliament Hill. It was a bit crowded because people were waiting for the river cruise. The boat was called the “Paula D.” I think that's the same boat I went on for my high school grad party. You asked me if I remembered the party. I said “I don't remember much,” and left it at that because I didn't want to get into how drunk I was that night haha!

We rode along the path and had to ring our bells quite a few times to let pedestrians know we were passing. We had to go slow now and then. We got to the Portage Bridge, then turned back.

We said we'd take you for a surprise. You kept asking what's the surprise. But I don't think it ended up being a big surprise because I asked if you wanted some bubble tea earlier. So you suspected. We rode back to the locks, crossed them and then the ride was uphill. It was a big hill, the opposite way to our fun downhill ride earlier. You made it up the hill, good job buddy! Mommy was behind us, she got stuck with some pedestrians so couldn't gather a lot of speed, but she made it up without having to get off her bike.

We rode along Sussex Drive bike path behind the American embassy. This put us by the stairs to go to the Market. They have this neat rail down the side of the stairs so you can guide your bike down the rail.

Near the bottom a tourist couple, they were seniors, asked me where the bike paths are around there. They had a map, so I told them about the paths we were just on. They were friendly and had some kind of American accent, maybe northeastern, but couldn't place where exactly, I want to say upstate New York, but not sure. The gentleman pointed to my arms and said “It looks like you do a lot of biking, you got some big tubes there!”

I caught up to you and Mom at the fountain at the entrance to York Street. There were people on benches, some smoking, a few street people on one of the benches. Two of them had bikes. We drank some water and had another snack.

It was hot. I watched the people around us and imagined them watching us, a little nice family we are, that's what I imagined people thinking of us. As we left, one of the street guys said, “It's good you're wearing a helmet.” I smiled and nodded. Then he said "nice bike." I thanked him and wished him a good day.

The Byward Market is busy so we stayed on the sidewalks mostly. We're not supposed to ride on sidewalks but oh, well, it's a bit busy for you on the streets. When it was too busy with pedestrians, we dismounted and walked our bikes. Mom didn't like riding on the sidewalk so one part we were riding, she got off and walked. She said after she heard a pedestrian say, “I'm pretty sure you shouldn't ride on the sidewalk.” Oh well.

We locked our bikes on Dalhousie Street, between Rideau and George Streets. We went to Chatime which is the bubble tea place. I got a large red-bean milk bubble tea. It had actual red beans in it with the pearls. Mommy got a taro pearl tea, I think. You got a mango juice with pearls and jelly. The bubble tea was nice and we sat in air-conditioned comfort. We didn't worry about slurping. 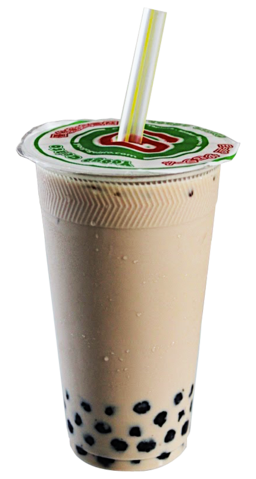 We took the Ottawa River Pathway along the old Rockcliffe Parkway home. It's called the Sir Georges-Étienne Parkway now. This path we could go fast, so after the lookout over the river, I said, "You lead." So you burned it all the way to the Aviation Museum. I had to pedal pretty hard to stay on your tail. Mommy was bringing up the rear. She had the bike panniers so was a bit slower.

We stopped for some water at the sign near the “T” where the path goes south. We took it easy the rest of the way home. Then when we passed Hemlock Road, it was a bit uphill and it was just like a ride home from school.

When we got close to home, it's a nice downhill so I passed you. When we turned into our court, I went no hands and pumped my arms, slowed down a bit so you could pass. You overtook me and smiled as I pumped my arms. You came in first! Haha. You knew I slowed down on purpose but I think you liked coming in first.

“How long do you think we biked? How many kilometres?” I asked.

“Twenty-six point two,” I said. “That's a marathon. But that's miles, not kilometres."

“Thirty point four,” Mom said as she read off her sports watch.

“That was the best day,” you said.

After we rested up, we wanted a little bit to eat. “Can I make eggs?” you asked.

So we heated up a skillet. You cracked the eggs. One of the yolks broke a bit. “Oops,” you said, a bit disappointed.

“Good job,” I said. The eggs looked like a smiley face. You laughed.

We waited for the eggs to cook and you flipped them like a pro. You're a real cooker now!

Mom likes her eggs over hard. We like them over easy, nice and runny. We doctored them up with some basil and sriracha. They were delicious.

We took our showers and you asked if we could watch something after. We were gonna watch American Ninja Warrior but it's not on Netflix. You looked at this show called “Strong.” A competition where athlete guys train women and they compete.

You loved the movie! Very much into it. But before that you wanted to help make supper. So helpful. You sauteed the mushrooms. I cooked the tuna steaks in a cast iron skillet. I made sure to sear them well and not overcook them (overcooked fish is not tasty).

I lay beside you, Mom at foot of bed. She gave you a kiss and I stayed a bit longer. I reached out my hand and you held my middle finger, just like you did when you were small. It was hot, but the fans kept us cooled off enough.

I stayed until 9:40 p.m. I placed my finger on your extra rib. It's this thing we do. You placed your finger on my extra rib. “Five, four, three, two, one ... extra-rib power!” we said. Then we make a “BRRGGHHHH” sound like a rocket ship blasting off while we point our fingers to the ceiling.

Then I gave you a kiss and said "I love you."

“Good night, buddy. See you in the morning.”

A beautiful time to be with you.